I was six months old when it was first realized something was wrong. I was running a fever and my mother took me to the hospital where I was diagnosed with spinal meningitis. My mother was told I would be lucky to survive and if I did I would not be able to walk and I would have mental issues due to the damage to my brain. It was in the hospital that I had my first seizure.

Time passed and I developed and did well as a child. When I was about 5 years old it was noticed that  I would have ‘spells’ where I would get a strong sense of fear and have a funny feeling in my stomach. That strange feeling would spread into my right arm and move involuntarily across my chest. I was told that I would stare blankly into space and the next thing I knew everyone would be gathered around me, asking if I was okay.

In fact, I was in the foster care system for 15 years, and I had multiple doctors and social workers tell me that I was not having seizures I was just trying to get attention.

Even though I did not have an official epilepsy diagnosis, I was placed on anti-seizure medicines from the time I was 5 years old.

The medications would usually help control the seizures for a couple of months, but then they would stop working, the seizures would return, and I’d need to change to a different medicine.

But the medicines also had various side effects. Some of them would make me angry or make me act in bizarre ways (like banging my head against the wall). Some would make my skin break out. Others would make me feel sick or disoriented.
I was in my early 20s when I finally got a definitive diagnosis of epilepsy from a neurologist in Knoxville. He pulled me off all my meds for 24 hours and then ran a series of tests that uncovered evidence of the seizures.
Having the epilepsy diagnosis was a relief in some ways. Finally, I knew what was going on in my body. But that didn’t make the anti-seizure medicines any more effective.
I had gotten my GED and started attending college when the seizures got worse. I had tried so many different medicines already, that I had pretty much run out of options in terms of trying to control the seizures with drugs.

At that point, I asked my neurologist about other options. He recommended that I look into the RNS System because my seizures had more than one starting point.

So in 2012, I went down to Nashville to see an epilepsy specialist at Vanderbilt University Medical Center. This time, they took me off my anti-seizure medicines during the testing and it showed them I was having three different types of seizures in my temporal and frontal lobes and that I would likely be a good candidate to receive the RNS System.

I had a hard time trying to decide whether to move forward with the surgery. At first, my doctor wanted to increase the dosage on my anti-seizure medicines, but the higher dose made me sick, so I had to go back to the previous, lower and less effective dose.

I went back to Vanderbilt and met with the neurosurgeon who would perform the procedure. He told me about the surgery in detail, and I promised to let him know my decision within a month. I was using medical transport to get back and forth between my home in Newport, Tennessee and Nashville, and on the way home, I was feeling scared.

It happened to be a cloudy and stormy that day. Faith is a strong part of my life, and I was looking out the 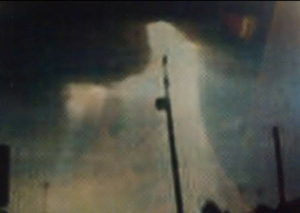 window and praying to God asking him for guidance. Just at the moment that I was praying for answers, the sunlight broke through the clouds and I saw this image of Jesus Christ. It astonished me and my driver! For me, that was a sign to leave my fear behind and go ahead with the surgery.

The next step was to get my intracranial EEG to see exactly where the seizures originated and make sure that I met the qualifications for the RNS System implantation surgery. After my visit in November 2012, I went back home to get everything straightened out with my insurance company and heal before the RNS System procedure.

A couple of months later, on July 28, 2013, I returned to Vanderbilt to get the RNS System implanted. The surgeon did a wonderful job, and I was only in the hospital for 24 hours. The next day, they released me and told me that I was good to go home.

I did have one problem during recovery – the next morning when I woke up at home, I couldn’t see well because my right eye had swollen shut and my left was partially swollen. I wasn’t in major pain, but it still spooked me! I spoke with my doctor and he told me that I had probably been moving around too abruptly and doing too much physical activity. He told me to take it easy while the healing took place. Sure enough, within a couple of days, the swelling subsided.

A couple of weeks after the surgery, I went back to Vanderbilt and met with my neurosurgeon, my epileptologist, and a member of the NeuroPace team to see how I was healing. Until that point the RNS System was just monitoring my brain activity and learning my seizure patterns, but they were ready to turn on the therapeutic part of the RNS System.

I started to see some benefits within that first month. After a few more months, most of the seizure activity disappeared. The involuntary arm movements vanished.

Before, my blank stares and lack of awareness during a seizure would last for several minutes. With the RNS System, the seizures I did have would only last 30 to 45 seconds, and then I would go back to normal.

For a while, I would go back to see my doctors every 3 or 4 weeks to get the settings adjusted and optimized. As we started to see progress, they reduced the frequency of my visits to every other month. Now I go 4-6 months between appointments.

At this point, it has actually been several years since I have had a seizure like I did before I got the RNS System. Very rarely, I may have an aura, but that’s the only sort of seizure activity I can feel now. My seizures came through the device only once in the last year, and at the time I was under a lot of stress and had forgotten to take meds.

The RNS System has been a great blessing for me. It’s allowed me to move out of my mom’s home, which wasn’t the greatest, and live more independently in an independent living home run by a non-profit organization. I have the personal space and privacy of my own room, but I share some common areas like a living room, laundry room, and kitchen with others. It’s a nice balance – I have my independence, but I’m not completely alone.

The RNS System has also made me more confident to go places and make friends. In the past, I couldn’t do those things as easily, I’d always be scared or worried about what might happen if I had a seizure. Now I can enjoy myself and have a good time without having to deal with those negative thoughts in the back of my mind.

I’m in the process of getting my driver’s license and going back to college. These were things that people once told me that I never would be able to do, but I always wanted to prove them wrong. That’s just my personality – when I’m facing an obstacle, I will fight tooth and nail to overcome it.

My long-term goal is to work with children ages 11 to 17 who are living with mental illness. I went back and forth between majoring in psychology or getting a social work degree, but now I know that I want to do clinical counseling for adolescents.

As someone who was raised in the foster care system, I saw that children with mental health challenges or even medical conditions like epilepsy can be pushed to the side and forgotten. So now I want to make a difference in these children’s lives. I figure if I can have a positive impact on even one person’s life, it’s all worth it.

When I speak with people who are considering the RNS System, I tell them that you can’t go into this expecting a snap-of-the-finger, magical, instant change. You have to be patient; the progress moves differently for different people.

Personally, the RNS System has turned my life around. It’s made me a happier person and boosted my self-esteem. Now I can say that I have epilepsy, but epilepsy does not define me.

Have questions, or want to know more?

Connect with a patient

This represents the experience of individual(s) who have used the RNS System.  Individual results will vary.

This site uses cookies to store information on your computer. Some are essential to make our site work; others help us improve the user experience. By using the site, you consent to the placement of these cookies. You may at any time change the settings regarding cookies. Read our privacy statement to learn more. Do not sell my personal information.

This website uses cookies to improve your experience while you navigate through the website. Out of these, the cookies that are categorized as necessary are stored on your browser as they are essential for the working of basic functionalities of the website. We also use third-party cookies that help us analyze and understand how you use this website. These cookies will be stored in your browser only with your consent. You also have the option to opt-out of these cookies. But opting out of some of these cookies may affect your browsing experience.
Necessary Always Enabled
Necessary cookies are absolutely essential for the website to function properly. These cookies ensure basic functionalities and security features of the website, anonymously.
Functional
Functional cookies help to perform certain functionalities like sharing the content of the website on social media platforms, collect feedbacks, and other third-party features.
Performance
Performance cookies are used to understand and analyze the key performance indexes of the website which helps in delivering a better user experience for the visitors.
Analytics
Analytical cookies are used to understand how visitors interact with the website. These cookies help provide information on metrics the number of visitors, bounce rate, traffic source, etc.
Advertisement
Advertisement cookies are used to provide visitors with relevant ads and marketing campaigns. These cookies track visitors across websites and collect information to provide customized ads.
Others
Other uncategorized cookies are those that are being analyzed and have not been classified into a category as yet.
Save & Accept
Powered by